The universal fertiliser with sulphur!

The guarantee of success

Environmental protection measures such as flue gas desulphurisation have resulted in sulphur inputs from the atmosphere being reduced to below 10 kg S/ha per year in many areas.

Only small quantities (10 to 40 kg S/ha) are released from the soil reserves annually. That is often not sufficient to supply the plant with an adequate level of sulphur. The amount of sulphur in the soil available to the plant may be subject to considerable fluctuations depending on the location and the fertilisation. There is often a sulphur deficiency at times of low mineralisation such as before or at the start of growing.

The sulphur requirement of most agricultural crops is between 10 and 70 kg/ha S* so the sulphur input from the atmosphere and the provision from the soil are today no longer sufficient to replace the extraction of average harvests.

Increased sulphur extraction is also observed due to the ever higher yields and quality objectives. Sulphur deficiency often occurs as a result of this. In addition to a reduction in yield, even
latent sulphur deficiency may lead to lower protein qualities, lower harvest qualities and poorer N-exploitation.

Reduced sulphur inputs from the atmosphere since 1990

PIAMON® 33-S – the guarantee of success

The optimal combination of water-soluble sulphur and very easily available urea nitrogen and ammoniacal nitrogen in PIAMON® 33-S, allows plenty of plant cultivation and economic advantages to be achieved. The even distribution of both nutrients in a granule means that PIAMON® 33-S can be used universally in all crops. This results in greater planning flexibility while saving on working hours and labour costs, also being easy on machines, plants and the soils.

Optimal supply with nitrogen and sulphur

Improvement in yield and quality for late fertilizing 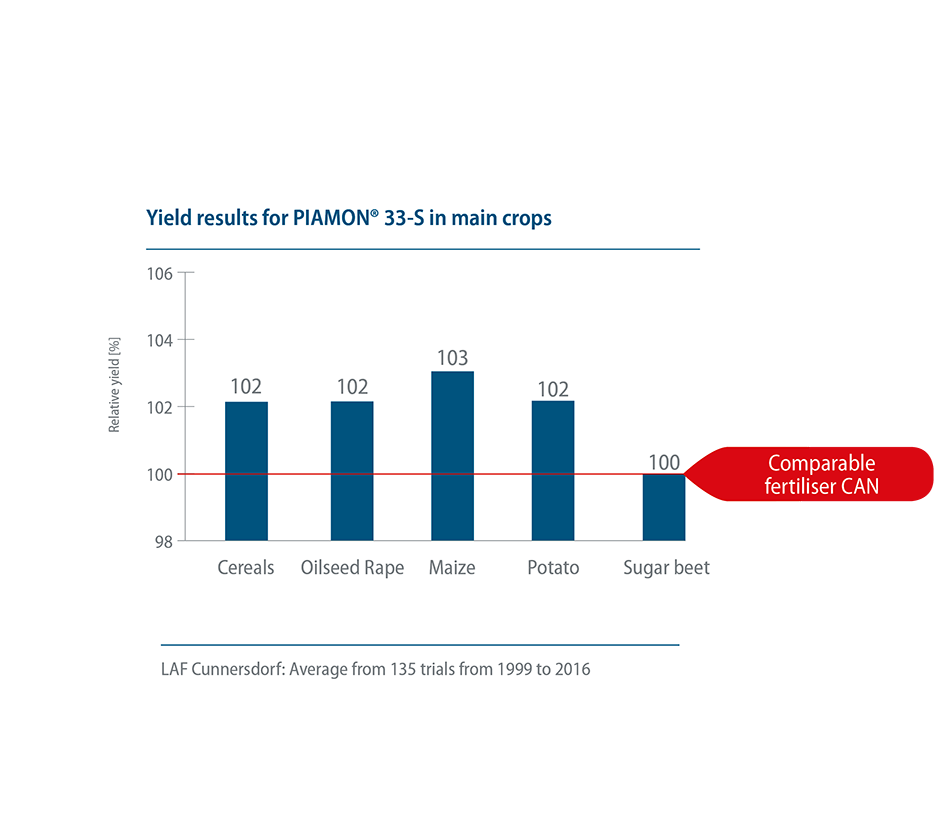 The use of PIAMON® 33-S is particularly economical. The simultaneous fertilisation of nitrogen and sulphur in one grain reduces fertiliser part applications.

Thanks to balanced plant nutrition, PIAMON® 33-S ensures maximum use of the nitrogen applied over the complete growing period. In addition to a higher yield, improved raw protein contents and sedimentation values can also be achieved depending on the crop.

PIAMON® 33-S is an extremely suitable mixing partner with ALZON® neo-Mplus as they both have the same grain size and density as well as a very similar granule structure. This helps to prevent segregation of the mixture during storage, transport and applications. The spreading characteristics of the composite fertiliser are almost the same as for its individual components. A mixture of PIAMON® 33-S and ALZON® neo-Mplus results in cereals-power® or OSR-power® depending on the mixing ratio.

As organic fertilisers only contain little sulphur which is available to plants, the combination with PIAMON® 33-S is recommended in order to guarantee an adequate supply of sulphur as well as nitrogen.

cereals-power® results in higher yields, good raw protein contents and it relieves pressure on the N-balance 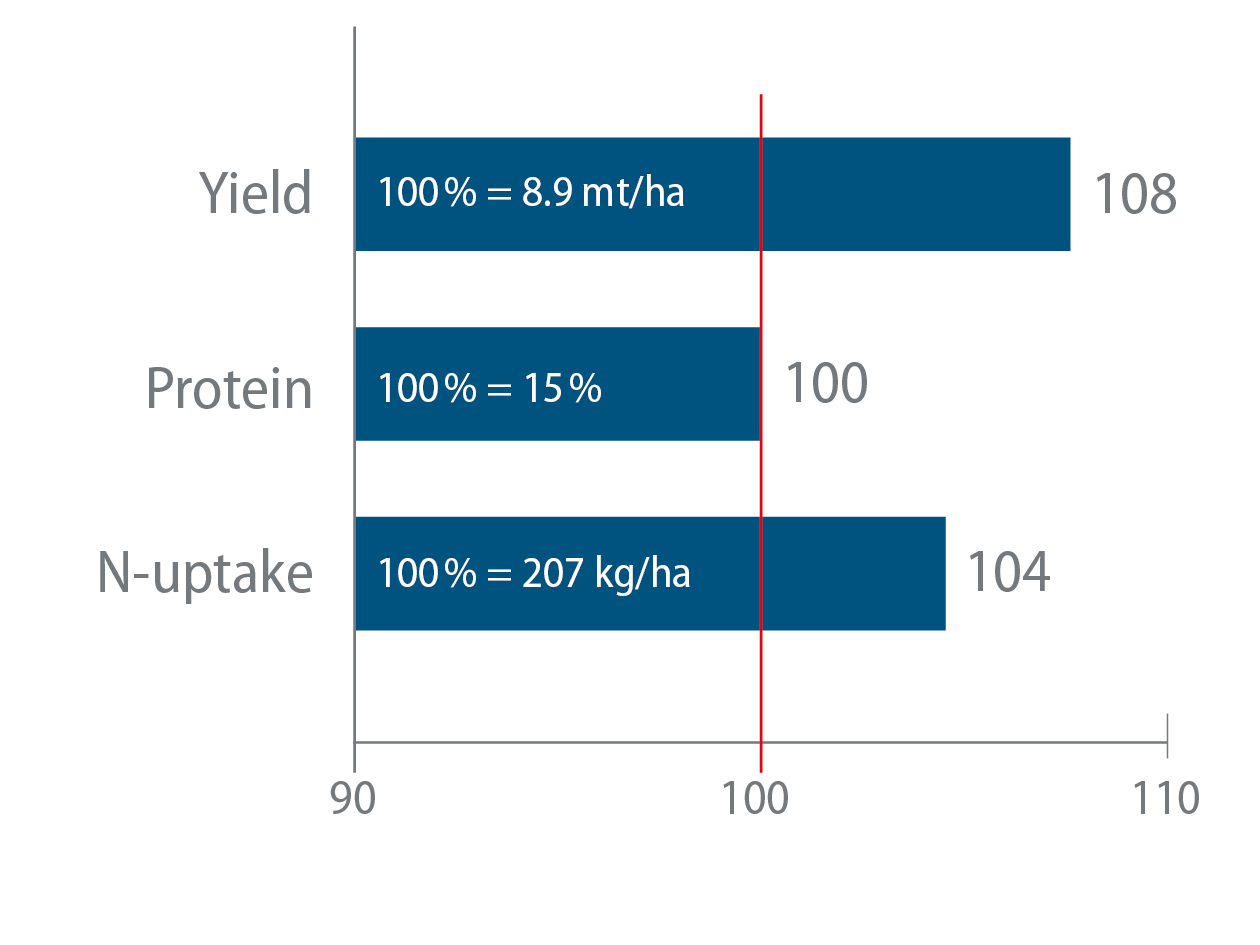 High level of flexibility for the application

The universal fertiliser with sulphur

The correct nitrogen-sulphur ratio is decisive

The sulphur requirement for agricultural crops varies. Cruciferous plants such as rapeseed have a particularly high sulphur requirement due to their high oil content. The sulphur concentration in the plant dry matter of oilseed rape should not go below 0.45 %. Concentrations should not go below 0.30 % for wheat, as high yields and protein contents are otherwise endangered (DLG 2012). In the event of an acute deficiency, sulphur fertilisation should occur right at the start of growing and at the start of stem extension at the latest. An additional supply of sulphur for quality application encourages the formation of raw protein. The absorption of sulphur into the plant occurs in sulphate form.

Sulphur deficiency can result in problems with the nitrogen absorption. Nitrate cannot be converted as there is a deficiency in the sulphur containing enzyme nitrate reductase. The nitrogen incorporation in amino acids is thus disturbed and protein formation is inhibited. One kilogram of deficiency in sulphur per hectare can block the absorption of 10 kg of nitrogen.

The nitrogen-sulphur ratios of various crops

With PIAMON® 33-S you simultaneously apply nitrogen and sulphur effectively in the optimum ratio. The following recommendations are based on a large number of tests in our agricultural applied research and in practice. They are to be adapted to the plant requirement in line with the specifications of the RB209 on the basis of local conditions. You can find out further information about the appropriate use of PIAMON® 33-S at www.skwp.de and it is also available via your specialist adviser at any time. 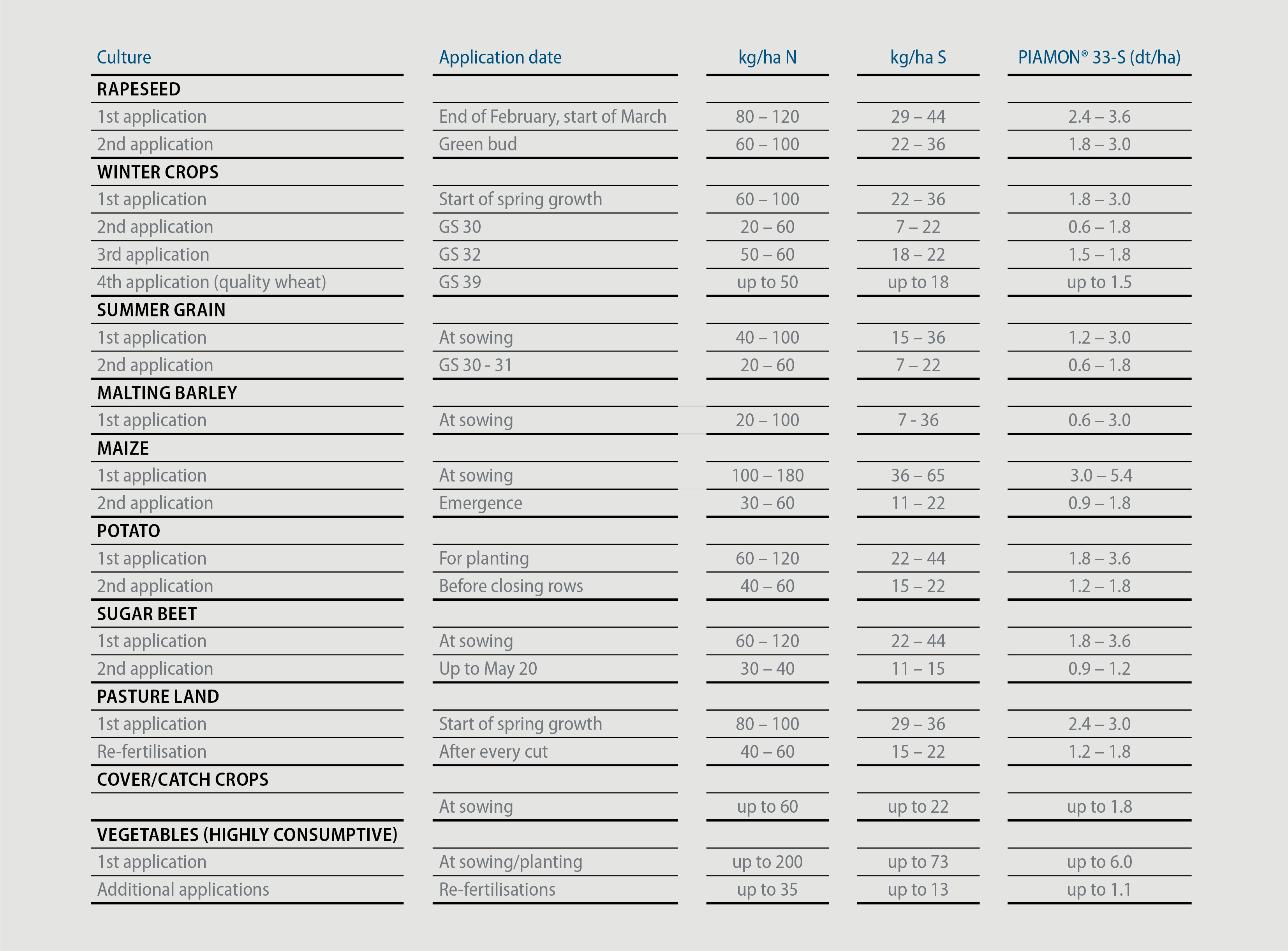